Posted by gojimmypi • Published on March 11, 2018
Today I'm trying to use the AVR serial port on a custom ATMEGA328 board.

Try as I might, I simply could not get it to work properly. The LED on the USB/TTL adapter would blink during data transfer, but no data shows up in Putty from the AVR.

After exhausting all obvious possibilities, it was time to get serious about looking at what's going on. Rigol oscilloscope debugging to the rescue!

I had not performed any signal decoding any time recently and needed to refresh my memory.  I tried reading the fine manual , but alas still could not get it to work quite the way I wanted. I found this really quite excellent YouTube video. (I have the DS1054z, but close enough)


In short, the most important thing is that the oscilloscope needs to be "zoomed out" (horizontal scale) when doing single trigger. The full capture is apparently the scale of the visible screen. I might have implemented that a bit differently but it is ok once understood.

First, an example of a properly working H (from "Hello World") as sent by Putty: 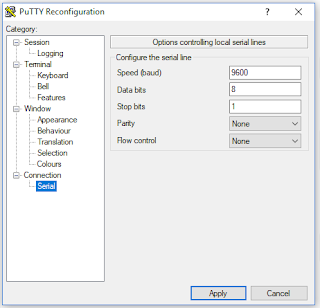 Fairly straightforward serial port setup: 9600 8N1. I connected my oscilloscope probe to GND and Tx of a typical USB TTL adapter . Pressing the "H" on the keyboard when Putty has focus, sends a nice, clean RS232 digital sequence to the TTL adapter as shown: 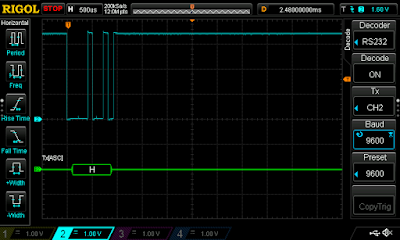 Reminder that  UART/TTL RS232  idle is normally high, transmission begins with low start bit, then (in our case) 8 data bits, least-significant-bit (LSB) first, then followed by stop bit (aka mark) which is high.

So ok, the TTL adapter is working. Actually, I already knew that, as I used it to login to the serial port of my Raspberry Pi just to confirm. Ok, so that's the easy one. Now on to the data coming from the AVR. Much more interesting: 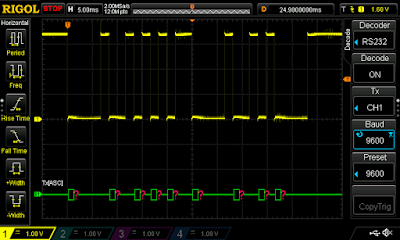 The first curious thing I observed was that the delay(milliseconds) function was off by an order of 16 (as measured by eye).  Note the scale here is 5mS per division; 10x slower that the trace above!

A coding delay(1000) actually waited for approximately 16 seconds. So the first thing I thought was perhaps the timescale was simply off, so I tried scaling the baud rate by 16. No luck.

Ok, this certainly explains why nothing is showing up in putty! First: notice there seems to be a duplicate character! (there's no echo; nothing connected to the Tx pin other than the oscilloscope probe) Next: notice the scale on the properly decoded character above on CH2 is 500 μs/div.  The scale on this AVR data is 5 ms/div.  The first low pulse on CH1 is 400 μs, but on CH2 more like nearly 7 ms (7,000 μs!)

Quick note on the math, assuming we're really off by exactly 16x:

The AVR serial port does indeed look like it is approximately 16x slower. Zooming in on that first low pulse to confirm: 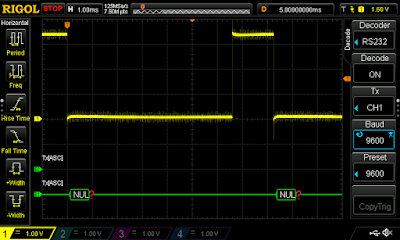 So ok, the good old Microsoft Paint program (glad to hear it will not be retired !)... a quick copy / paste / scale of the non-working (10x scale; recall 500μs/dev vs 5ms/div ) waveform on top of the properly decoded signal shows we're not going to get from here to there with a simple baud rate scale. The data is not just duplicated at the wrong speed, something weird is going on with a lot more data than just a single character: 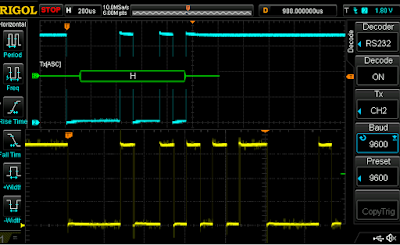 So it would seem my AVR is not going to be doing any useful Serial Port Communication anytime soon. Perhaps there's something weird going on in Atmel Studio. But of all the people that would know how to properly program an ATMEGA328, one would think it would be the ones that built Atmel Studio, eh? Time to go back to bed, just in time for the sunrise.

UPDATE: Ok, so after getting some sleep I thought more about this problem. I was wrong about the math! I needed a target that is 15.75 (more precisely 15.12) times faster than the oscilloscope is capturing. So I simply scaled the baud rate in the app:

I've kept the estimated and precise numbers above, as the initial estimate of 15.75x worked, even though 15.12x is the more precise answer. Somewhere buried in the RS232/UART spec is probably a timing tolerance range. 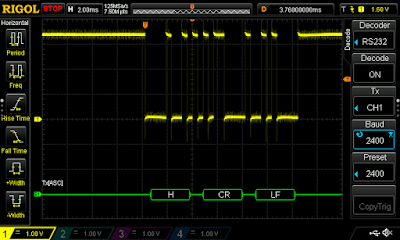 Here's a lesson I've repeatedly learned: walking away from a problem can sometimes solve it ten times faster as compared to attempting to brute-force it non-stop. (particularly at 4:00 in the morning, time change day)

So a little bit of googling (ok, imagine being an embedded programmer before the internet, say in the 80's. crazy)... I found this YouTube video on ISP programming problems due to wrong clock frequency:

But that's not really my problem - as I can program it using ISP or debugWIRE, but the clock is still wrong by a factor of 15.12x. 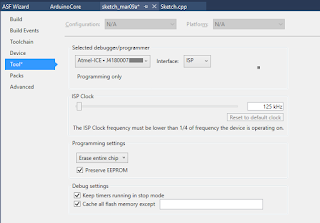 But that's just the clock speed at which the ISP is doing the programming; this is not the clock speed of the processor. Eventually I found this interesting clip (starting at about the 1:50 mark):

This does seem like a reasonable solution. Perhaps I should have known there's a frequency setting. How else would the code "know" how long a millisecond is?

But I've never needed to manually set the processor speed ever before and never had any serial problem quite like this. In any case - first time for everything. So I tried values of 16000000UL and 1600000UL, and others. No values of #define F_CPU seemed to help. Ok, at this point I'm glad it was not something so obvious.

I'm think it might be something with the fuse settings, but even with the online fuse calculator , nothing jumps out as the obvious answer.

Stay tuned for an update if I figure this one out. In the meantime to set a baud rate, I'll simply multiple by 15.12 (certainly makes for some not-very-portable code   :|  meh)

I've posted my entire Atmel Studio Solution here. (note that it is in the M5-RadioHead branch of my LoRa-GPIO project)

Thanks to this post on the AVR Freaks forum , I did find this setting in Atmel Studio for F_CPU: 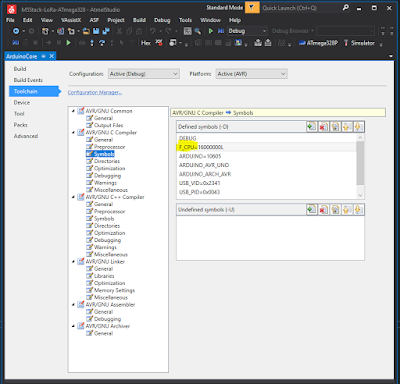 It was suggested that I use the Arduino IDE to program the M5Stack AVR chip instead of Atmel Studio. I found this forum thread that has the solution for using the Atmel ICE with the Arduino IDE. In particular, the input device, data gateway, and composite devices with hex Id's: 03EB and 2141 need to be selected with the install-filter-win.exe tool: 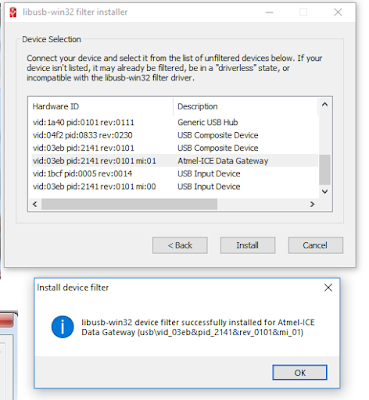 The Arduino IDE uses avrdude to program the ATmega328; the resultant output looks like this:


However I had the same result in needing the baud rate to be scaled by 15x in order for it to work properly. So this was still not the solution.

Many thanks to Jimmy Lai at M5Stack for sending me fuse selection setting pics (there are many settings to choose from!): 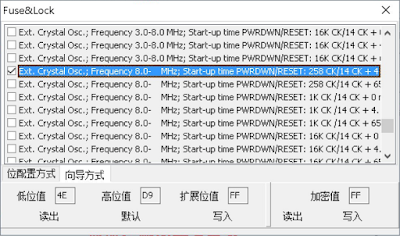 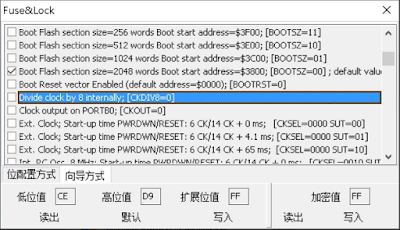 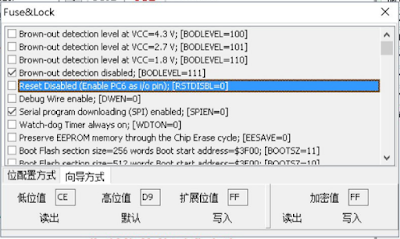 In the second and third pic, it is important to note that the DIVCK8 needs to be left unchecked, despite the value here showing 4E in that first pic. The desired values are: CE D9 FF

My fuse settings before: 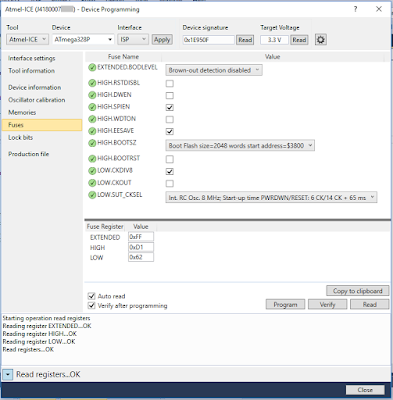 Notice LOW.SUT_CKSEL! It is set to an internal clock! There's actually an external clock on the board: 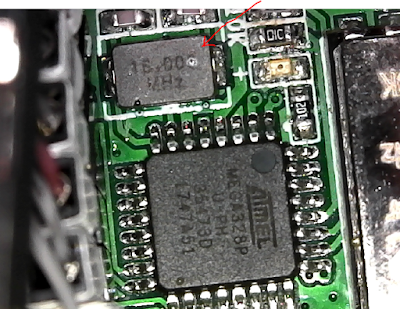 Ok, one would think that even with an external clock, if the fuse settings say to use an internal clock - and this is in fact the default value, that it would work properly with the ATmega328p, eh? Apparently not. As seen above, the clock was wildly off.

When changing the fuses, there's a nice indication of what has been changed, but not written to the chip: 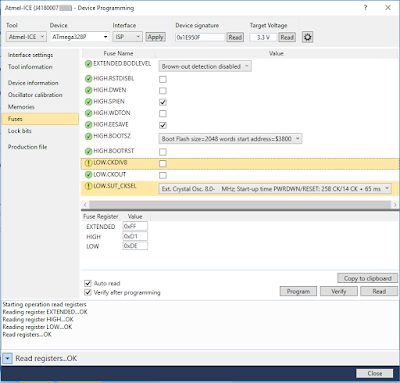 When pressing the Program button, there's a warning that if you don't know what you are doing, you might brick the target: 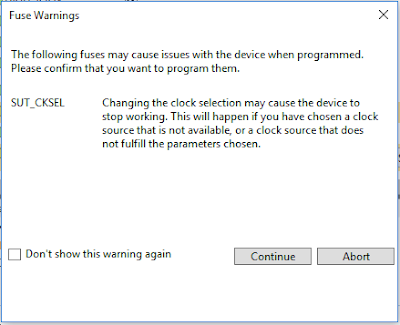 Braving the ominous warning dialog box... My final fuses look like this: 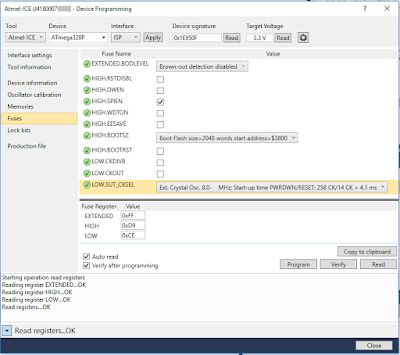 TADA! <big Happy Dance> Serial.println("Hello world") at 2400 baud actually streams out the UART at 2400 baud. Go figure. This was a tremendous amount of time spent on a couple of fuse bit settings. However it was also an awesome learning opportunity.

More coming soon.... now to get those RadioHead drivers onto the AVR...


Resources, Inspiration, Credits, and Other Links::