I first learned about the orbtrace-mini on Hackaday. Upon reading that article, I immediately sent [zyp] an email expressing my interest. I received a prompt reply and was instructed to add myself to the waiting list. My board recently arrived! 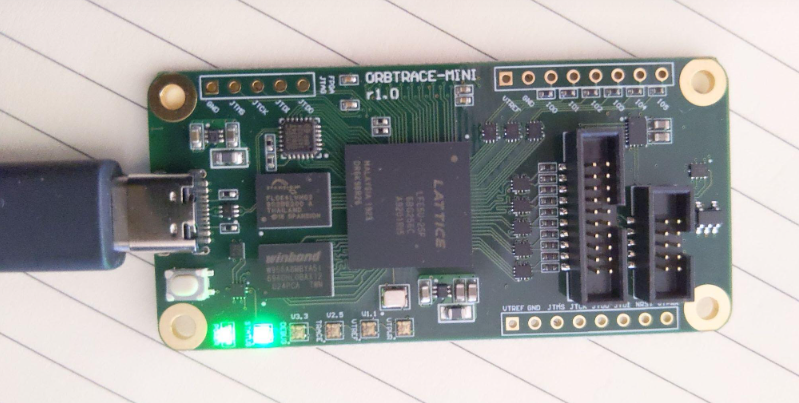 When I first plugged my new orbtrace-mini into Windows 10, I saw the usual song-and-dance about installing a new device. There was a small delay and then a message that “Your device is setup and ready”.

I Check Device Manager, just to be sure. I saw all these warnings: 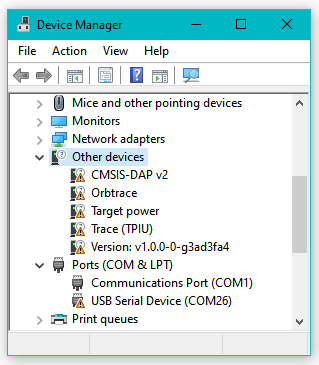 Indeed Zadig indicated that the device is likely less than ready:

So I instead connected the device to my Ubuntu VM, But I saw this error:

So I went back to Windows. The instructions say to use mysys32 / ming32 and ran the command: 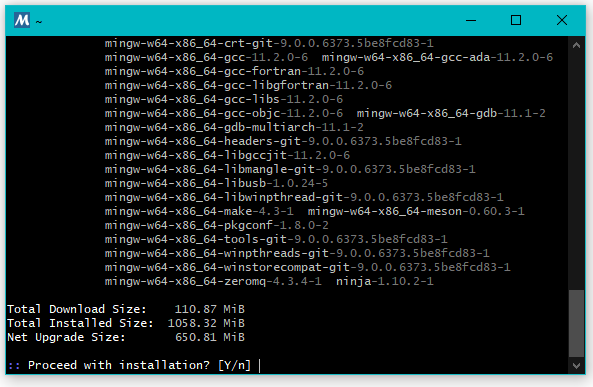 But saw this error: 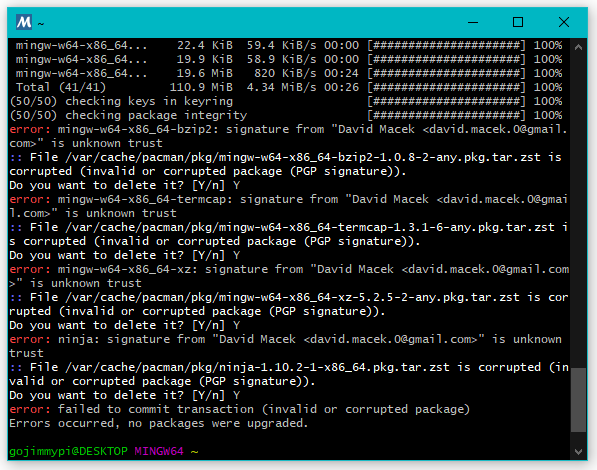 I don’t use mingw very often, particularly now that WSL is so cool. I needed to google how to update, as ‘aptget -update’ of course doesn’t work here. I tried to update:

Actually, I ended up running pacman -Sy and pacman -Su several times until they reported there was nothing to do.

ming64 claimed it needed to exit, so I allowed it… gave it some time, and tried again. New error:

I ran pacman -Suy a second time. This next time took much longer to complete: 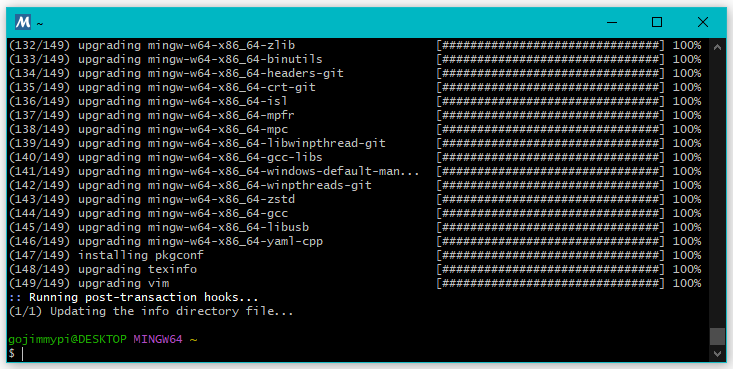 Now for the build:

All my Windows executables ended up in C:/msys64/home/gojimmypi/orbuculum/build/install/ 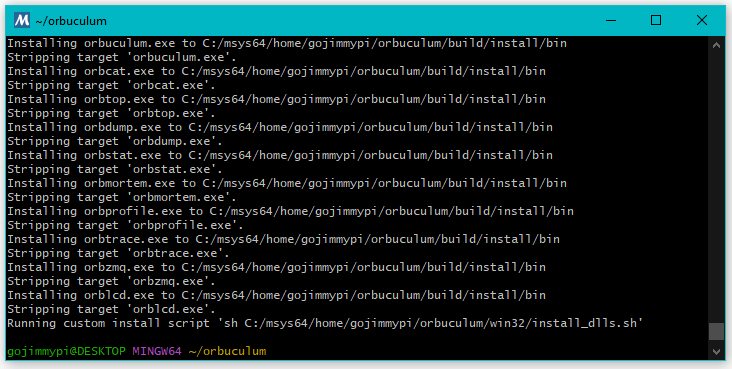 The file path can be pasted into Windows File Explorer, even with forward slashes.

I see a similar response in ming64:

This is almost certainly an issue easily resolved with Zadig, but I’ve been unable to find anyone else that encountered this problem and I don’t know which drives to use for all the different devices. I’ve reached out on Discord and will update here soon.

I had a reply from [zyp] almost immediately:

you might want to start by loading a newer gateware on it, WCID descriptors were added in v1.1 and should make the windows experience more pleasant

The instructions for installing openFPGALoader are refreshingly easy! No fuss with clone, toolchain, build, etc. I was able to install on Windows using MSYS2/MingW:

The executable gets installed to C:\msys64\ucrt64\bin.

Running from a DOS prompt and the device is not found. Tried unplugging and re-plugging. Same result:

Tried running the command from the MingW prompt:

This is not really a surprise, as Windows still lists “none” for most of the drivers:

I also tried using the dfu_util that’s worked for my ULX3S, but saw the same results: 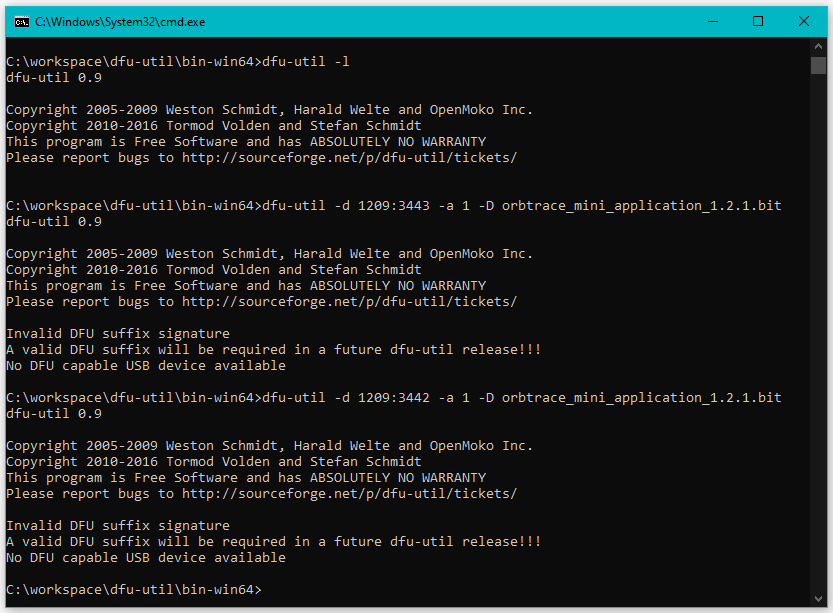 I noticed there’s a discrepancy on USB Device ID between the Build Instructions and my board. So I opened orbtrace #12.

I tried to use Zadig to set a variety of drivers on Interface 0 without success.

Having no luck on Windows, I tried dfu-util on my Ubuntu VM. I already had 0.9 installed, but it could not see any devices. Next I tried the latest version from as described on dfu-util.sourceforge.net. Still no joy.

After all of the above, I realized I was confusing the bootloader (aka gateware) with the application. I ended up completing my upgrade steps in an Ubuntu VM, not Windows.

Bootloader mode is when the purple light is on. Key here: HOLD DOWN the button while powering the device up UNTIL the light turns purple.

Be sure to specify a slot for dfu-util (the -a parameter); Slot 0 is not used.

The application gets loaded into SLOT 1 with the dfu-util parameter -a 1.

The bootloader gets loaded into SLOT 2 with the dfu-util parameter -a 2.

BE SURE to not mix up the slot numbers with application vs bootloader. If you do, well, don’t power cycle until you load the correct one in the proper slot.

BOTH the application AND bootloader need to have the purple light on to load.

For reference, after the upgrade to v1.2.1 (and not usins Zadig to force device drivers), I see these:

Note that I do not see Interface 1:

Huge thanks to [mubes] and [zyp] on the 1bitsquared orbuculum discord channel for helping me get my board upgraded and working.