Posted by gojimmypi • Published on October 29, 2019
Some notes on the NanoVNA -  The tiny, inexpensive Vector Network Analyzer.

A few months ago, I purchased the amazing  NanoVNA on ebay for about 50 bucks. What an impressive work of engineering for such a ridiculously low price! Ok, admittedly the really cool stuff comes from the people that are working on open source software. That hardware would have much less value without the software,

When ordering a new VNA, pay attention to what you get and what you might need. Mine came with the essential 50 ohm load, open, and short SMA plugs, 2 SMA cables, a USB-C cable, and a tin box.

I didn't know it at the time (although probably not a surprise)... but there are a lot of imitations. ymmv. The only "official" one that I have since become aware of, is this Nooelec kit . Considering the time and hassle of ordering connectors that otherwise come included with this kit - I probably would have purchased it instead, had I known about it.

Here's mine in a EMI-protective tin (that normally should have the lid on when you are using it!) measuring a cheap LoRa antenna: 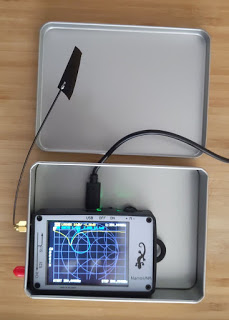 The tin box is much more than a carrying case! I drilled some holes in mine and used it as a protective shield. Measuring antenna characteristics with, say your computer just inches away will almost certainly cause interference and erroneous results.

I ended up paying nearly the same amount for a variety of adapters and connectors. There's an amazing variety available. SMA Male to IPX ufl (e.g. the antenna adapter shown above), SMA to BNC (e.g. Oscilloscope probe), SMA to F-Type (e.g. cable TV), F-type coax male / F-type coax female and a variety of others  are things to consider - depending on the need.

It's probably a personality disorder  quality attribute, but here are the adapters I ordered after I had my NanoVNA but realized I didn't have the right one on hand: 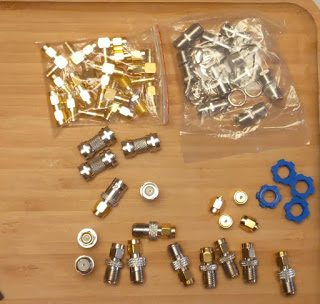 The little blue 3D-printed nut spinners were a cool gift. I had never used them, but certainly recommend them now! They are quite handy for tightening the SMA connectors,

A couple of key places for the NanoVNA user to be aware of:

Once you have a NanoVNA, unless you want to upgrade firmware - probably the only thing of interest (other than the documentation) - is the NanoVNA Saver software .

There's an excellent, easy-to-understand sequence of pictures that illustrates the plugs, cables, and connections for each step of calibration. From the cho45 NanoVNA manual :

One of the most important things that I learned during the upgrade process is that there are apparently TWO different types of firmware. The standard version and the "AA" (Antenna Analyzer) version. Upload the wrong firmware, and I saw this mess of squiggly lines on the screen:

This was the result of my compiled version off of GitHub. I was never able to get it to work. :/

Fortunately, one of the folks on the user groups posted some useful files  that helped me recover.

When upgrading the firmware, DON'T FORGET THE JUMPER on the board. Yes, this is in upper case as even though it was listed in the instructions, I forgot that part and used Zadig the change the USB drivers BEFORE the jumper was in place. Don't do that.

In fact, I didn't need Zadig at all, erm, once the BOOT0 jumper was in place. For more info on the dfu-util and Zadig, see  Scott Hanselman's Blog on How to fix dfu-util, STM, WinUSB, Zadig, Bootloaders and other Firmware Flashing issues on Windows .

Note that more recent versions of the firmware have the ability to put the board into DFU mode. See the config menu option.

Windows (and WSL Linux users) can download the dfu-util from SourceForce (too bad that site is such a haven for excessive ads). I used the 64 bit Version 0.9 .

Despite there being an apt-get version of dfu-util for WSL Ubuntu, I was not able to get that version to recognize the NanoVNA. Fortunately Windows apps can also be used in WSL. Don't forget the "./" for WSL.