After the previous pains of getting Circuit Python to just build for the FOMU, it is time to move on to more interesting things.... actually putting it on the FOMU!

Back to my first notes on this topic, the dfu-util is needed. There are a variety of sources of this app. Unfortunately the only one I was able to get working was from the ad-spam-laden sourceforge (it's really a shame what that site has become). Fortunately there's a ULX3S dfu-util repo with a precompiled binary. No ads.  (If you, too are tired of so may ads, check out my pi-hole blog ).

At this early stage of the game, there's really quite limited documentation available. One observation from the Makefile is that during the (by default relatively quiet) build of Circuit Python... the only thing happening there is just that: the RISC-V (more specifically VexRiscv) compile of "C" code into a binary DFU file. This means that the FOMU needs to have been pre-configured: make the FPGA a soft CPU.

Fortunately, I had already loaded foboot onto my FOMU. Specifically, I took the shortcut of using a pre-built version of hacker-updater-v2.0.3.dfu as noted here . To do something using with another FPGA, say... the ULX3S... clearly I'm going to have to get control of building that bitstream.

But for now, let's run with that. The FOMU is configured as a soft CPU, which we learned from the Circuit Python text file is a VexRisc. The "only" thing needed is some code for it to run: Circuit Python.

There's an apt-get install version of dfu-util for Ubuntu, but it does not work in WSL. It does not "see" the FOMU

There's another one that came with the FOMU Toolchain mentioned in my previous blog , but that one does not work either, giving instead this error message:
Of course, I'm doing this in WSL (not WSL2).. and there are known problems with native USB drivers not working in WSL. Given the libusb error, I'm pretty sure neither of those linux versions of dfu-util will ever work. However, one of the amazing things about WSL: Native Windows and DOS apps can be launched from the command prompt! The DOS version does work!
This should identify the FOMU installed:
Note that I have DFU Bootloader v2.0.3 installed on the FOMU as described in my prior blog. In particular, see tinyusb issues #293 for some oddities that I encountered when using older versions of the bootloader. See also  WSL Issue 2185 and 3745  regarding native USB drivers in WSL.

If you need to make:
The send the firmware to the device:
Note that this is a "soft" program of the FPGA. The firmware.dfu can't be sent to the FOMU again until power cycle. In fact, after a power cycle, it *needs* to be sent again. Normally I might say something about preventing corruption to be careful to to the USB eject. But after removing the device, it is no longer a Circuit Python.

For reference, to put foboot in place:

The thing is: we don't have a bootloader for the ULX3S. It does not show up as a device for dfu-util. Recall we use the ujprog to upload FPGA bitstreams to the FPGA, and the litex_term to upload the firwmware.bin file.

As noted in a prior blog, I have a soft CPU script that shows how this is done on the ULX3S:

Unfortunately, I've spent a bunch of time chasing toolchain and memory problems. After updating everything to solve a problem where Migen was not creating a top.v file (which as it turns out, was even not necessary to solve the problem I was seeing), LiteX is now complaining that memtest is failing.

My specific memory chip on my ULX3S is a  AS4C32M16SB . I did at least learn how to do a memory check:

A good memory test looks like this on an HDMI monitor: 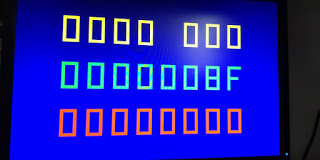 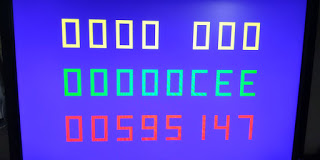 The 64MB test blinks onboard LEDs like this . The 32MB test does not.

In the meantime, there are some really quite talented folks that do this stuff rather easily . Perhaps I'll have more luck next time.