Posted by gojimmypi • Published on December 30, 2018
As the end of 2018 approaches, I thought it might be nice to share a list of some of my favorite electronic gizmos. In no particular order:

It's difficult to have any gizmo list without the Raspberry Pi being listed. So voila, let's move on.

One of my favorite gizmos is the DPS5015. In and of itself, perhaps not super interesting: your basic Programmable Supply Power Module. However it was the first commercial product that I "re-purposed" and learned a lot of hardware hacking as noted in my blog from 2017 . 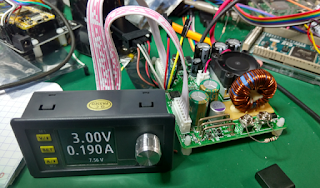 I think some of the most amazing devices are the SDR gizmos, such as the NooElec NESDR Smart Bundle on Amazon. (On my wish list is the Lime Micro SDR). Last year I wrote a blog on streaming SDR information directly to an OpenWRT router . I also used my SDR during development of my LoRa button-pushing project (see below).

Also cool, although also not new for 2018 - is the M5Stack series of ESP32 modules, complete with enclosure and display. 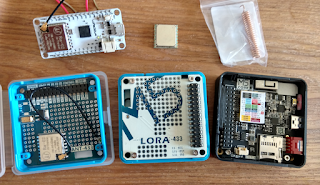 I wrote a blog about the M5Stack LoRa range, as well as a blog about my LoRa-GPIO project (pushing a button from afar). A prototype M5Stack that had both an AVR and ESP32 device turned out to be quite the educational experience as noted in my Serial Port Debugging blog, featuring the Rigol Oscilloscope Protocol Decoder. (see also Dave's EEVBlog Review of the DS1054z )

Early in the year, I bought an inexpensive Altera Cyclone IV EP4CE6 FPGA Development Kit and wrote a blog about it. This was my first experience with FPGA and proprietary tools (Quartus ).

I think one of the most significant new gizmos of the year was Luke's tinyFGPA BX. Be sure to follow @tinyFPGA on twitter. Learning to program an FPGA is something that I've been wanting to do for a long time. Luke - along with a bunch of other FOSS advocates, such as FPGAwars - have finally made it easy and inexpensive for the newbie. There's some really great BX getting started information. One of the coolest FPGA programmers has got to be Icestudio .

Late in the year,  [@esden] introduced another cool FPGA device on Crowd Supply called iCEBreaker . Some folks lucky enough to attend conferences have been able to obtain theirs... others (including me) will not have them until delivered until next summer.

Finally - at the very end of the year, there's also the  Fomu Crowd Supply project - An FPGA board that fits inside your USB port! (also due next year)

There's an excellent web-based Verilog editor and simulator online from the folks at 8-bit workshop. Be sure to check out their new book Designing Video Game Hardware in Verilog , as well.

At the very end of the year, I found the XGecu TL866II Plus USB Programmer from the XG Autoelectric folks (see also xgecu.com), thanks to @tinycompblabla.  At only about 50 bucks, it is considerably less expensive than something like the elnec or dataman . I'm looking forward to receiving it in January.

On the topic of component testers, is the AVR-based M328 Transistor Tester project. (source code here ). This is really a quite clever device that automatically detects what component is connected, then indicates whether it is good or not. For things such as transistors, basic key characteristics such as gain and Vbe are displayed.

See also the ISP pins  in case you want to get creative with your transistor tester.

One of the cool gizmos that I recently purchased is the Arduino MKR WiFi 1010 (also available from Amazon). Atmel SAMD21, ESP32 WiFi, ECC508 Crypto-Authentication, all in one place! This gizmo is so cool, I wrote an entire blog about SWD programming the Arduino MKR WiFi 1010 with the Atmel ICE .
In the Fall of 2018, I found this cool SPIdriver dev board on Crowd Supply. This too, was so cool that I wrote an SPIdriver blog about it. Note that the same guy has an upcoming and similar I2C driver project , as well - that looks just as cool.

Although perhaps not a gizmo in the pure electronic sense... I did buy myself an inexpensive 3018 Pro CNC machine - as CNC programming is also something I've always wanted to learn. I need to get my thoughts together and put all that information in a blog entry soon. Stay tuned.

This blog is still a work in progress... if you think of any gizmos that I should look at and perhaps add to this list, let me know via twitter or @ gmail.

Wishing everyone health and prosperity in the coming new year.