Posted by gojimmypi • Published on February 04, 2017
To date, my go-to development environment - in Visual Studio 2015, is the VisualMicro add-in. There's no hardware debugging, but I've found it easy to use and reliable.

However, I've been interested on getting JTAG ESP8266 hardware debugging working in Visual Studio using the Sysprogs VisualGDB add-in  - with mixed results.

I started with the Altera Bus Blaster than I already had on hand for programming Arduino. (hint: don't bother, it won't work: no reset control - see this discussion  )

There are several tutorials, some not really up to date, but each with interesting information:

First, just figuring out which JTAG debugging hardware to buy: first I tried the Segger (kudos to them for having a generous discount for people not developing to sell a product). The Sysprogs folks then recommended that I follow the tutorial exactly, by using an Olimex instead. Another week into my 30 day trial and Mouser Electronics to the rescue with an ARM-USB-OCD-H debugger  delivered. The price was about the same as the EDU version of the Segger. (approx. $60)

I had problems even finding the ESP8266 Xtensa-LX 106 elf for GDB stub  (hint, it does not display in the directory shown in tutorial!)

I also had problems with the interesting feature to debug existing project.

In the end I did get the debugging working.

I have  this video on Creating Olimex VisualGDB Embedded Project for ESP8266 :


and  this video on JTAG Debugging ESP8266 with Olimex and VisualGDB 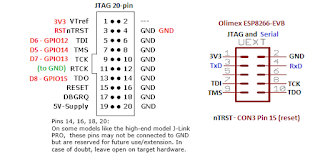 Now that I have this working with the Olimex version of the ESP8266... on to trying to do this with the NodeMCU version!

I'll be posting updates on twitter with source code on GitHub.